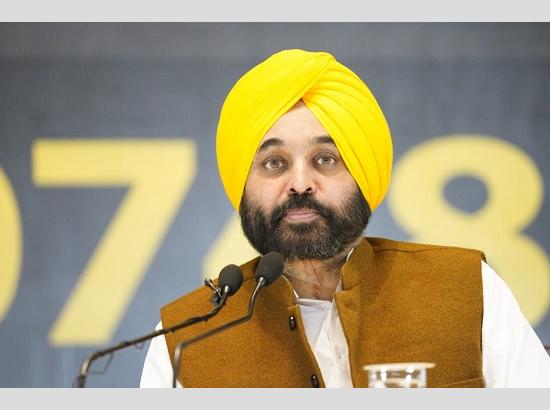 Punjab Chief Minister Bhagwant Mann has today given a stern reprimand and said that the state government will take strict action against those educational institutions that ban the speaking of Punjabi language in their campuses. Addressing a gathering on the last day of the Inter-University Youth Fair at Punjabi University here, the Chief Minister said that it has come to his notice that some educational institutions are imposing penalties for speaking Punjabi on their campuses. He said that this is unreasonable because the mother tongue of all the Punjabis living in the state is Punjabi.

Bhagwant Mann warned such educational institutions that strict action would be taken against them if they imposed such fines. Calling on the youth to play an active role and work shoulder to shoulder with the Punjab government to make Punjab a leading state in the world, the Chief Minister said that the state has immense strength and skills of the youth, which is a constructive change in the society. Always acts as a motivator to bring.

The Chief Minister said that the aim of the state government is to make the youth of the state capable of giving jobs and not taking jobs. He said that attention is being given to impart skill development education to the youth so that skilled manpower can be prepared for the industries. Bhagwant Mann said that the state government has taken many initiatives to create employment opportunities for the youth. The Chief Minister said that the state is fortunate that two sessions of G-20 are being held in the state, out of which the first session on the subject of education will be held on March 15, 16 and 17.

While the second session on labor will be held on June 22-23. He said that the state is known all over the world for its warm hospitality and no stone will be left unturned to welcome the guests of the countries participating in these special events. Bhagwant Mann said that these sessions will be held at the holy land of Amritsar where every other day lakhs of pilgrims come to Sri Darbar Sahib, Durgiana Mandir, Sri Ram Teerth, Jaliawala Bagh and other places to pay their respects. The Chief Minister said that the state government will make adequate arrangements for the comfortable stay of the dignitaries attending the convention.

He said that apart from the good stay of the guests, traditional Punjabi food will also be served to them. He said that a glimpse of Punjabi culture will be presented to the guests from all over the world during the cultural events. Bhagwant Mann said that if they express their desire to go to other districts of the state, arrangements will be made to take them to places like Jalandhar, known as the hub of sports. On this occasion, apart from Cabinet Minister Gurmeet Singh Meet Hare and Chetan Singh Joudemajra, Chief Minister’s Special Principal Secretary Kumar Amit and Punjabi University Vice Chancellor Prof. Arvind and others were present.