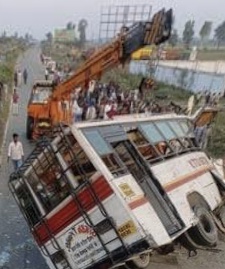 There is news of a tragic accident in Uttarakhand. Where on Children’s Day was celebrated. At the same time, the news of a major accident is coming from Udhamsinghnagar district. A school bus coming from Kichcha to Nankamatta to celebrate Children’s Day collided with a truck. It is being told that there was chaos on the spot due to the accident. Two children and one staff member died on the spot. While about 40 children are said to be injured. According to media reports, the students of Vaidya Ram Sudhi Singh Girls School Kichcha were brought on Children’s Day by school bus to Nankamatta tour. It is being told that there were more than 40 female students along with the staff in the bus. A school bus was hit by a truck in Sitarganj while returning in the evening. The accident took place in Sitarganj Kotwali area on NH 74