Alert: from SBI Bank for it’s customer from Sova Malware virus ,may empty your account 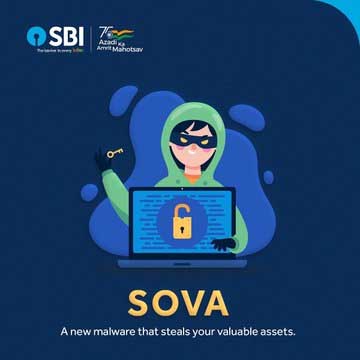 If you receive an SMS, WhatsApp or an email with your bank name. It has a link to the bank’s app. You can download the app by clicking on the link. After some time you find that all the money in your account is gone.

In fact, a new banking virus is currently spreading in the cyber sector. The name of this mobile banking trojan virus targeting customers is SOVA. It can damage the files of Android phone.
This may make the user a victim of financial fraud. Once in mobile, it is also very difficult to remove. The country’s largest bank SBI has alerted its customers about this virus.

SBI has warned its customers about this virus through messages. The bank has asked its customers not to click on any link or install banking apps from unauthorized stores.

The bank said the virus steals users’ personal information. SBI wrote to its customers, ‘SOVA is a malware that targets banking apps to steal personal information. Do not install apps by clicking on links or from unauthorized stores.
The country’s cyber security agency has also issued an advisory regarding this virus. The virus was first detected in the Indian cyber sector in July. Since then it has reached its fifth edition.

The Indian Computer Emergency Response Team (CERT-IN) said, “The institute has been informed that Bharti Bank customers are being targeted by the new SOWA Android Trojan.

It is targeting mobile banking. The first version of this malware was secretly released in the markets in September 2021. It is capable of logging in via name and password, stealing cookies and affecting the app.”

It has been said in the advisory that this malware was earlier more active in countries like America, Russia and Spain. But in July 2022, it started targeting several other countries including India. According to this, the new version of this malware hides with fake Android applications to trick users.
After this it appears with the ‘logo’ of popular legitimate apps like Chrome, Amazon, NFT (Cryptocurrency Linked Token). It so happens that people do not know about ‘installing’ these apps.

Let it be known that CERT-In is the central technology unit for dealing with cyber attacks. It aims to protect the internet sector from ‘phishing’ (fraudulent activities) and ‘hacking’ and online malware virus attacks.

This server is controlled by people who want to get a list of target applications. This virus can take screenshots and record videos from webcams. (with PTI input)