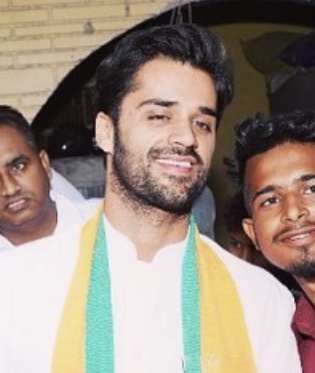 Bhavya Bishnoi, who won the by-election from the Adampur seat in Haryana, will take oath as MLA today. Bhavya is the grandson of former CM Chaudhary Bhajan Lal. The seat fell vacant after the resignation of his father Kuldeep Bishnoi. Politically, however, this victory is of little use to the BJP in terms of party position in the Assembly. They will be forced to take the support of the Jannayak Janata Party (JJP) to run the government in Haryana. It is certain that after Bhavya’s victory, the BJP has 41 MLAs in the assembly.

Why JJP is necessary for BJP?

This was the situation of the BJP and JJP in 2019. Now after the oath, Bhavya Bishnoi will also become the formal MLA of the BJP, then BJP will have 41 MLAs.Party position in Haryana Legislative Assembly

In the 2019 assembly elections, a hung assembly was formed in the state. BJP got 40 seats. Congress has 30 MLAs in the assembly. JJP has 10 MLAs. Of the remaining 9 seats, INLD has one, Gopal Kanda’s HLP has one, and Independent MLAs in 7 seats.BJP’s IT cell released posters for the 2024 elections. In which CM Manohar Lal Khattar has been made the face. There is no mention of Deputy CM Dushyant Chautala in the poster. These posters were trended on Twitter with ‘Manohar Mihara Haryana’.

The discussion was intensified by the proposal of independent MLAs

Not only the opposition parties but also some independent MLAs are keeping an eye on breaking the BJP-JJP alliance. BJP’s Haryana in-charge Biplab Dev had come here before the Adampur by-election. Then some independent MLAs met him. It was then discussed that the independent MLAs advised them to break the alliance by assuring them of their support to the BJP. However, after that, there was no discussion about it.

The relationship between the two soured several times.

In Haryana, relations between BJP and JJP have soured several times. Recently, their relations were strained regarding the Adampur by-election. Dushyant Chautala remained missing from the campaign posters of Bhavya and Kuldeep Bishnoi in Adampur. Angered by this, JJP leaders did not go there to campaign. Although CM Manohar Lal reached on the last day, Deputy CM Dushyant Chautala also had to reach. A few days ago, CM Manohar Lal held a press conference on the work of the government in Delhi, but Dushyant was not seen in it. A few days back, the JJP stayed away from the program of Defense Minister Rajnath Singh.

Digvijay Chautala had told the lack of photos was surprising.

In the Adampur by-election, Digvijay Chautala said I am surprised to see the photo of JJP leaders on the poster banner of Kuldeep Bishnoi. We are running a coalition government with the BJP in the state. The senior leadership of the BJP always says that we have to take the alliance further. There should be such a by-election and even after that there is no photo of any senior leader of JJP, this attitude is quite shocking.