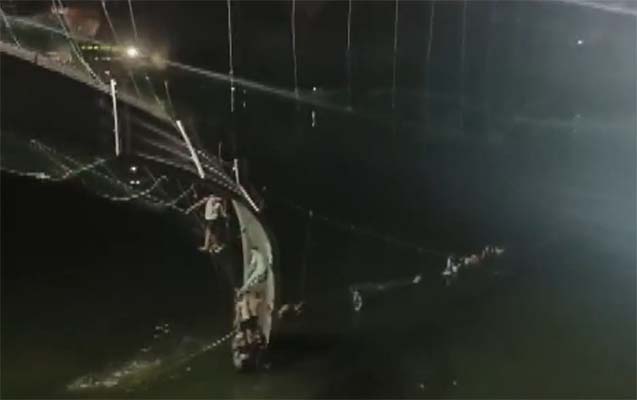 Gujarat Minister Brijesh Merja has said that 35 people have died due to the collapse of the Morbi cable bridge. More than 100 people are feared to be injured in this incident.

It is being told that around 500 people were riding on the bridge when it collapsed. The rescue operation is going on in full force at the spot.

The Prime Minister has also announced an ex-gratia of ₹2 lakh from PMNRF for the next of kin of each of those who lost their lives during this incident. The injured would be given ₹50,000.

According to reports, the suspension bridge collapsed in Morbi today. It is feared that around 100 people are still trapped in the water.
The bridge was opened four days ago after repairs

PM Modi has sought urgent mobilisation of teams for rescue ops, while Gujarat CM Patel has given instructions to arrange immediate treatment of injured pic.twitter.com/VO8cvJk9TI