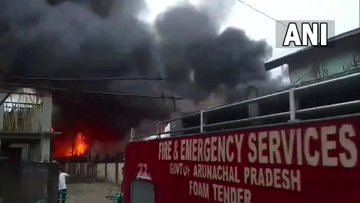 According to information received, more than 700 shops were burnt to ashes due to a fierce fire in Itanagar, Arunachal Pradesh.

This incident of terrible fire has come out from Naharlagun area of ​​Itanagar. Due to this incident, the loss of crores of rupees has come to light.

However, no information is yet available about why and how the fire broke out. Fortunately, no casualties have been reported in this accident yet.
News agency ANI shared pictures and videos of the fire and gave information about this major accident.

It was reported that only two shops caught fire in the first two hours. But soon the fire took a terrible shape.

#WATCH | Arunachal Pradesh: A massive fire broke out in Itanagar's Naharlagun due to unknown reasons. Over 700 shops burnt to ashes; however, no casualties reported yet

As per sources, fire engulfed only 2 shops in the initial 2hrs, but the fire dept failed to control the spread pic.twitter.com/edeFudEXHl