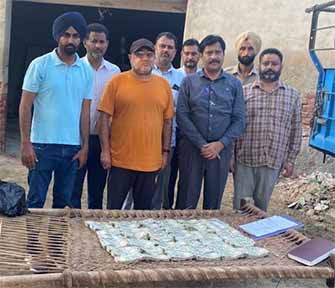 Giving more information, he said that Parik Bas, a resident of Bhanwar Lal, Thana Kalu, Bikaner, Rajasthan, had filed a complaint with the police on 20 July 2022 that his brother Ashok Joshi, who lives in Ludhiana, had cheated his employee named Gautam through taxi driver Kavaljit Singh. 86 lakh was sent to get payment from But on that day the said Inspector Bajwa (348/Firozepur) in consultation with Assistant Sub-Inspector Angrez Singh (145/Firozepur) and Rajpal Singh (1235/Firozepur) and Hauldar Joginder Singh (145/Firozepur) stopped the said taxi. Confiscated the entire amount i.e. 86 lakh rupees from his brother’s employee and taxi driver.

He said that in order to misappropriate the said amount, the above police personnel registered a false case under the NDPS Act at Ferozepur Cantonment police station, showing the recovery of 1 kg of heroin and drug money of Rs. 5 lakh from the employee Gautam and the taxi driver. given He said that taking immediate action on the complaint, the Punjab Police registered a separate case against all the above police personnel and ASI. Angrez Singh , Rajpal Singh and Hauldar Joginder Singh were arrested. They are now in jail.

The spokesperson further said that after this the case was transferred to the Vigilance Bureau , Vigilance arrested the fugitive accused Inspector Bajwa who is now in the custody of Vigilance on police remand. He said that further investigation of this matter is going on.