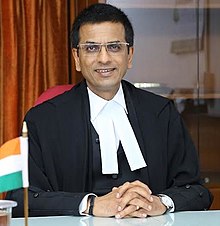 Justice Chandrachud’s father has also been the CJI of the country. His father had a tenure of about seven years and four months as CJI. Which is the longest tenure of a CJI in the history of the Supreme Court.

After doing BA Honors in Economics from St. Stephen’s College, Delhi, he did LLB from Campus Law Centre, University of Delhi and LLM and Doctorate in Jurisprudence from Harvard Law School, USA.
Justice DY Chandrachud has overturned his father’s decision twice, now he is the new CJI of the country.

Part of many benches giving historical decisions
Justice Chandrachud has been a part of several Constitution Benches and Supreme Court Benches that have delivered landmark judgments. These include the Ayodhya land dispute, decriminalization of same-sex relations under Section 377 of the IPC, cases related to the validity of the Aadhaar scheme, the Sabarimala issue, permanent commission to women officers in the army, permanent commission to women officers in the Indian Navy. Such judgments are included.