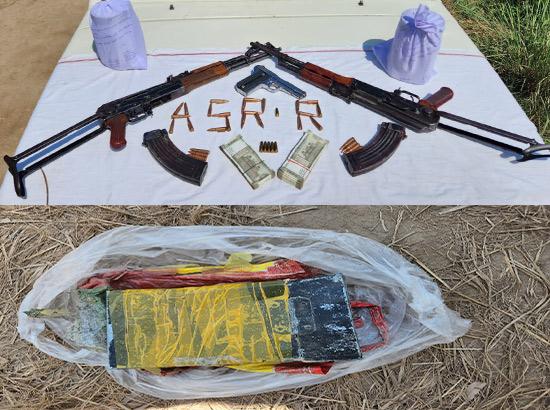 The arrested accused has been identified as Yograj Singh alias Yog, a resident of Rajoke village in Tarn Taran. Apart from this, the police have also identified five other operators of the module, who are associated with the module for carrying out illegal activities in Punjab and neighboring states.

The police recovered an RDX loaded tiffin box from the accused, which was made into an Improvised Explosive Device (IED) or tiffin bomb; Two modern AK-56 assault rifles with two magazines and 30 live cartridges; A .30 bore pistol with 6 live cartridges; and recovered 2 kg of heroin.

DGP Gaurav Yadav said that the arrested accused Yograj is the main operator of this module and was wanted by the state police and central enforcement agencies in at least five criminal cases including the seizure of five AK-47 assault rifles in Tarn Taran in September 2019.

He further said that the preliminary investigation revealed that the cross-border operations related to arms-explosives-narcotics smuggling were carried out by Yograj on the instructions of terrorists/gangsters Landa, Rinda and Happy and jailed smuggler Gurpavitr alias Sai resident of Lakhna, Tarn Taran. were done He further said that Yograj was active in the recovery and further delivery of arms and narcotics on a large scale.

Senior Superintendent of Police (SSP) Amritsar Rural Swapan Sharma said that the police have taken a major operation to expose the members of Landa-Rinda terrorist module. The police have managed to identify the five operators of the existing module and a manhunt is being launched to nab them.

He said that further investigation of the matter is going on and more weapons and explosives are likely to be recovered soon. It is worth mentioning that the F.I.R. No. 107 dated 04/10/2022 by NDPS. It has been registered under Section 21/27-A/29/61/85 of the Act and Section 25/54/59 of the Arms Act at Police Station Ramdas, Amritsar Rural.