Most Polluted cities in India after Diwali . 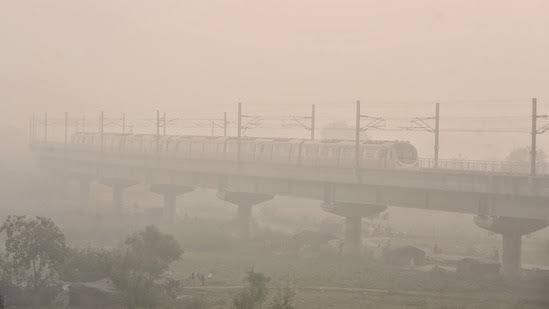 On Diwali, people burst firecrackers in Delhi, the air is 10 times more polluted than normal in many areas.

New Delhi: On the night of Diwali, people burst firecrackers in every corner of the country.  Due to this, the air of many cities of the country became polluted.  According to the Central Pollution Control Board (CPCB), the Air Quality Index (AQI) of Delhi reached the Very Bad category on Diwali night.  Anand Vihar recorded an AQI of 377, which is considered a very poor category.  AQI was also 322 in Sector-116 of Noida.  Talking about Gurugram, the AQI of this place was 346 at 9 pm.  According to the CPCB, an IQ between 301 and 400 is considered very poor.  Prolonged exposure to such air can cause respiratory disease.  The maximum temperature of New Delhi on Diwali night was recorded at 31.2 degrees Celsius, one degree less than normal.  The minimum temperature was recorded at 14.5 degrees Celsius, two degrees below normal.  The humidity level was between 43 percent and 90 percent.  According to IQAir, Delhi’s AQI became “very poor” due to stubble burning and bursting of firecrackers.
On Diwali, Delhi was the most polluted city in the world.  At the same time, Pakistan’s Lahore was the second most polluted city.  The weather department has predicted clear skies on Tuesday and the maximum and minimum temperatures are expected to be 31 and 15 degrees Celsius respectively.  According to the website of the Central Pollution Control Board, AQI of 322 was recorded in Sector 116 of Noida.  Agra’s Sanjay Palace had the highest AQI of 305.  256 was recorded in Rohta.  Bareilly’s Rajendra Nagar had 173 and Kanpur’s Kidwainagar along with Kalyanpur had an equal 224 AQI.  In Lucknow, the highest AQI was 178 at Talkatora District Industries Centre.  Pallavapuram had the highest AQI of 204 in Meerut.  Kashiram Nagar in Moradabad recorded 112 and Maldahiya in Varanasi recorded the highest AQI of 137.  Jhunsi and Municipal Corporation in Prayagraj had an equivalent of 130 AQI.
The air quality in Meerut on Sunday before Diwali was the same as 2021.  AQI was recorded at 313 before Diwali in 2021, while AQI stood at 288 on Sunday night.  Meerut was the third most polluted city in the country.  At the same time, Bulandshahr was the first most polluted city in the country and state.  AQI reached close to 300 overnight.  Air quality is likely to worsen in the next 24 hours.