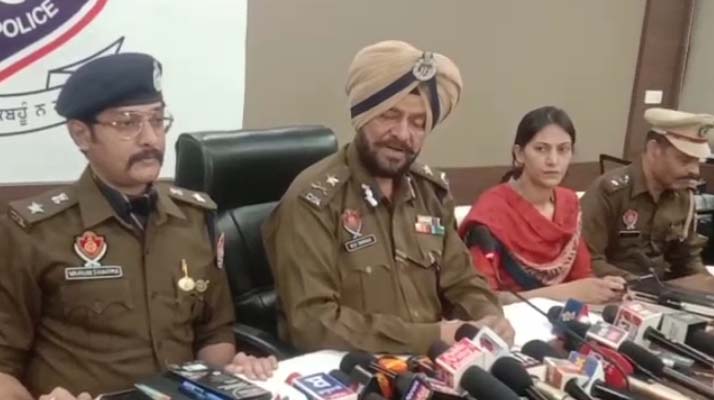 IGP Patiala Range Mukhwinder Singh Chhina and Varun Sharma SSP Patiala told in the press conference that a case number 238, dated 11.11.2022 A/D 419, 420, 465, 468, 471, 120B .PC, 66d IT. Act, 2008, was registered at Thana Kotwali, Patiala based on a confidential tip-off that certain persons were extorting huge sums of money from candidates appearing in various recruitment examinations held for government jobs to answer questions correctly. Helped candidates to pass the test by using fraudulent means like electronic devices.

In this connection, five persons named Navraj Chaudhary and Gurpreet Singh of Deena village of Patiala, Jitender Singh of Bhullan village of Patiala, Sonu Kumar of Ramana-Ramani village of Haryana and Varjinder Singh of Jind village of Nachhar Khera of Haryana were arrested. The arrested persons revealed during interrogation that they used to provide candidates with GSM devices, which contained SIM cards and tiny Bluetooth earbuds for seamless connectivity. The candidate will carry the GSM device concealed, usually hidden in shoes/socks, etc.

The arrested Varjinder Singh son of Satyawan, a resident of Nachhatar Khera, Jind, Haryana disclosed that fake candidates applying for the examinations used to take pictures of the question papers with the help of wireless cameras and send these pictures out to pre-determined persons.
Subject experts from different disciplines from outside places like Haryana, who were already involved in this criminal conspiracy, would then solve the questions and the answer key is prepared accordingly. The answer key was then assigned to the candidates through a GSM/Bluetooth device.

At least 7 to 10 more persons belonging to Haryana and Punjab are yet to be arrested in this criminal conspiracy/racket, according to the revelations of the arrested persons. According to the investigations conducted by the Patiala Police so far, the gang has confessed to providing its illegal services to some candidates in the Naib-Tehsildar recruitment exam recently conducted by the Punjab Public Service Commission, Patiala. Such candidates are being identified by the investigation team.