Tunnel found near the Session court for eviction of the prisoner from the session court, Read full news ! 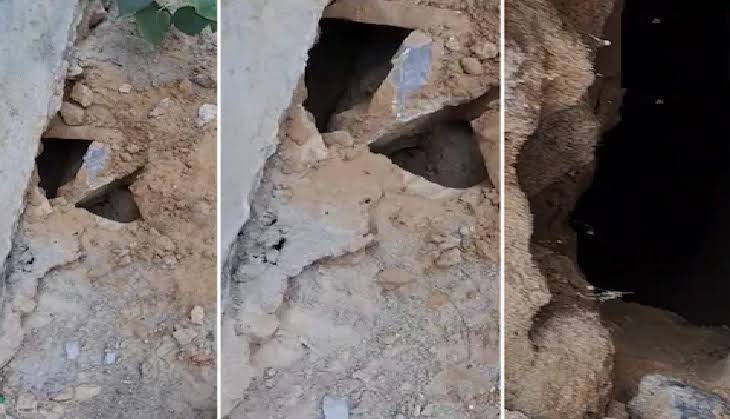 Jaipur. A tunnel dug next to the temporary jail built for the prisoners in the Sessions Court premises has been found. The policemen eere stumbled upon hearing this news. However, during this time, the policemen did take a sigh of relief as non of the prisoner escapedfrom  the Central Jail. At the same time, the tunnel has been closed by adding stones and soil.

According to the information, prisoners are brought from the Central Jail for appearing in various courts located in the Session Court premises. In this case, a temporary jail has been made here for them. Where they are kept during their trial and are taken back to the Central Jail by bus together in the evening. As it was a Sunday, there was no movement of the parties in the court premises and there were no other people except the lawyers.

In such a situation, it is being suspected that the friends of a prisoner have dug a tunnel after seeing the opportunity. However, due to the concrete floor inside the temporary jail, the mouth of the tunnel could not open inside the jail. It is also possible that after locking the prisoners , the prisoners would put weights on top of the tunnel from inside and try to escape when the tunnel opens.

It is significant that a large number of under-trial prisoners are brought to the Sessions Court daily by the jail administration. Here, precautionary policemen conduct spot checks before locking in temporary jails. Incidents of the accused trying to escape from the Sessions Court premises have happened many times in the past. Recently, the accused in the check dishonor case tried to escape by jumping down from the first floor after freeing the hand of the constable, but a lawyer present there also jumped down with him and caught the accused. Earlier, many years ago, the prisoner tried to escape from the temporary jail, but he was also caught.

There are only two employees in the session court at night from 6 pm to 8 am. Although earlier there was a police station here. In which policemen were present round the clock, but the outpost was burnt on March 7, 2013 during the lawyers’ agitation and since then there is no strong security system. The report sought from the CMM, DJ, II Gyan Prakash Gupta says that the spot has been inspected on receiving the information. The Chief Metropolitan Magistrate has been asked to meet the PWD officials and submit a report in this regard. Will review the security system afresh.