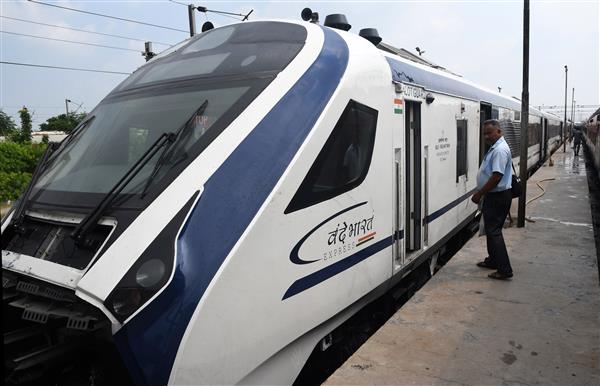 Vande Bharat’ will run from October 19: Chair car fares are almost equal to Volvo; Time will be less than 1 hour, ticket booking will be from tomorrow

To promote connectivity and tourism in Himachal, Prime Minister Narendra Modi has given the country’s high speed train Vande Bharat to the state. This is the fourth semi-high speed train of the country which will run at a speed of 130 kilometers per hour. According to the railway chart, this train will start running regularly from New Delhi railway station to Amb Andora station in Una district from October 19. This train will cover the distance of 412 kilometers between New Delhi and Una in 5 and a half hours. This train will run 6 days a week except Friday.

If seen in terms of fare, the fare of Vande Bharat Express train and Volvo buses is almost the same. The fare from Amb Andora to New Delhi in Volvo bus is Rs 991 and the fare from Una to New Delhi is Rs 899.
Those traveling in the chair car of the Vande Bharat Express train will also have to pay Rs 955 for this distance. Yes, they will not get food on the way. Fare will increase on taking food facility.

This train will pass through Rupnagar Nangal Dam, Panipat, Kurukshetra, Karnal and Sonepat stations but will not stop at any of these stations.
Vande Bharat Express train passengers will be able to travel in chair car and executive chair car. The base fare from Una to Delhi in a chair car will be Rs 759. Including railway reservation charge, superfast charge and GST etc. it will be around 955 rupees. If the chair car passenger also wants food during the journey then he will have to pay Rs 308 extra.

Similarly, the base fare of Executive Class has been kept at Rs 1556 which does not include reservation charge, superfast charge and GST. Including all these, the fare will be around 1890 rupees. If a passenger of executive class also wants the facility of food in the train, then he will have to pay 369 rupees extra for that.
Whether to take food or not, the option has to be selected while booking the ticket.
Railways will start booking from tomorrow

Railways will start ticket booking for this train from October 14. The train will have a total of 16 coaches which are equipped with modern facilities. According to the online chart of the railways, the Vande Bharat train will start from October 19.

Prime Minister Modi first launched the Vande Bharat Express in the year 2019. These trains are equipped with an automatic engine, which reduces power consumption by up to 30%.
On-demand Wi-Fi

Passengers traveling in Vande Bharat Express train will get on-demand Wi-Fi facility. Every compartment of the train has a 32 inch screen on which necessary information will be available to the passengers. Many facilities including seat number in Braille script, seat handle have been provided in this vehicle for the disabled.

The Executive Chair Car has seats that rotate up to 180 degrees. Four platform side cameras are installed outside this coach of the train, including rear view cameras.
The Vande Bharat train will run from Amb-Andora to Una, Nangal and Chandigarh railway stations at an average speed of 110 km. Due to the large rail line between Ambala and New Delhi, its speed will be 130 km. Its speed is fixed at 100 kilometers per hour from Una to Andorra.
Tie up from hotels to eat

Rohit Jha, station master of Una railway station, said that the Vande Bharat Express train does not have the facility of a pantry car. IRCTC has tied up with hotels to provide food in this train. Apart from this, hot case facility will be available in every coach of the train.