Big announcement of contract employees before Dussehra; On 5th October 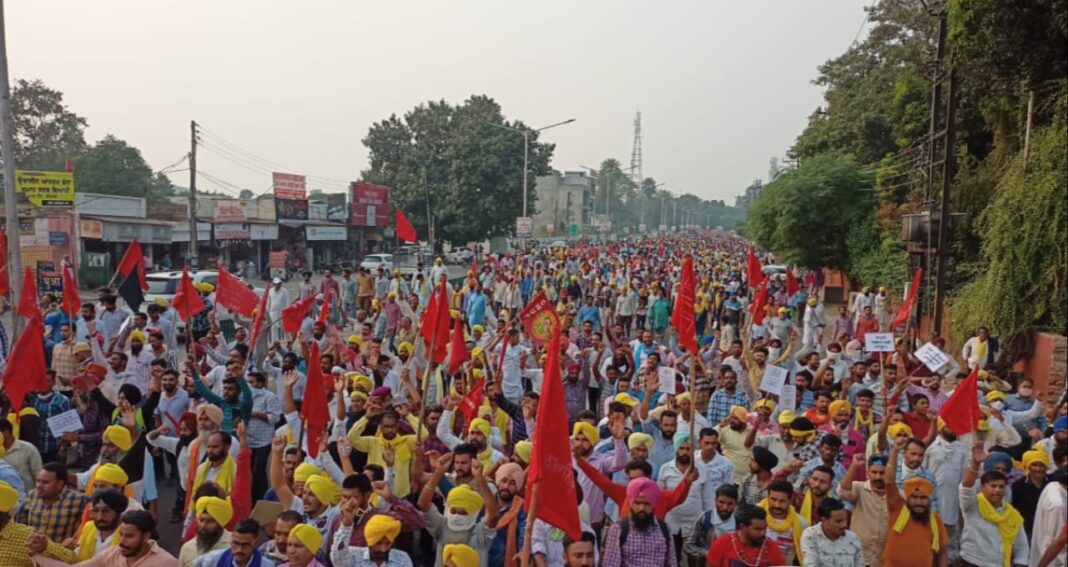 Announcement of contract employees before Dussehra; On 5th October, effigies of the state and central governments of Phukong

Provincial leaders of Theka Employe Sangharsh Morcha (Punjab) Virinder Singh Momi, Jagrup Singh, Gurvinder Singh Pannu, Balihar Singh, Sher Singh Longowal, Ramanpreet Kaur Mann, Jaspreet Singh Gagan, Simranjit Singh Neelon, Surinder Kumar, Pawandeep Singh issued a statement to the press. He said that like before, this time also the contract employees of various government departments on the occasion of Dussehra festival on October 5 blew the effigies of the state and central governments, which are now a symbol of evil, and threw out the corporators, contractors and companies from the service establishments. They will reiterate their pledge to protect them, regularize all outsourced and enlisted employees in the department, achieve livable wages, cancel forced retrenchments and continue the already ongoing struggle till victory.

Along with this, for the success of the protest call of the Chief Minister to jam the state highway in Dhuri on October 7 against the deceitful tactics of the Punjab government, a message will also be given to all the contract employees to reach Dhuri with their families. Mentioning the compulsions behind this call for struggle, the leaders of the front said that government institutions like electricity, water, health, education, water supply, sewerage, transport, aviation, banks, insurance, telecommunication etc. In the name of service, the blood and sweat of the people was done.

In which there was a complete ban on the entry of private companies, making profits, today when the construction work of these institutions has been completed, they have become capable of providing maximum and cheapest services at a low cost, while it is for millions of unemployed. have become capable of providing permanent employment, then it was decided to hand over these institutions to domestic and foreign companies with the connivance of all kinds of state and central governments.

Under this policy, the Central and State Governments, which were responsible for the maintenance of these government institutions, have started looting 18% of the total expenditure incurred in them through the weapon of GST. Contractors and companies have been guaranteed 16% profits, collection of service tax from 05 to 08 percent has been started, outsourcing recruitment rule has been implemented instead of regular recruitment of employees to make them regular in this permanent work area. It has been avoided.

Under the Minimum Wages Act, 1948 for Outsourced Contractual Employees, they have been given the right to brutally exploit contractual employees by giving them concessions in collusion to fix wages at will by entering into a written agreement to fix wages, which is why According to the agreement, instead of paying Rs 25000/ per month to a contract employee, fraudulent companies are robbed of his salary by paying Rs 9000/ per month.

Regarding this black business today, the Chief Minister of Punjab Bhagwant Mann is also accepting this truth in the election campaign of Himachal Pradesh and Gujarat and is playing drama to grab the chair like Punjab by making his fake fortune among the outsourced and enlisted employees by shedding crocodile tears. , who is not even willing to negotiate with the outsourced/enlistment employees on their demands after grabbing the seat in Punjab.

In this way, this struggle call given by the contract workers’ struggle Morcha Punjab is not only limited to getting permanent employment for them, but this struggle is for the service institutions, treasures and hard work built by the hardworking people of Mulkh with their blood and sweat. There is a common struggle to protect the interests of Vadera and all the hardworking people against the ruthless robbery of power, which is our responsibility to fight, so we have a strong appeal to all the outsourced and enlisted employees and other hardworking farmers-labourers of Punjab. That they too must make their due contribution in this struggle.